Boot is a small village in Eskdale, Cumbria, in the Lake District of England; It forms part of the Borough of Copeland.

There are two roads from which to access the village,
one of which is the Hardknott Pass and Wrynose Pass, England’s steepest road; it is closed when icy (often, during winter).

The village of Boot has two pubs: The Boot Inn (formerly The Burnmoor Inn) and The Brook House Inn; however The Woolpack Inn – Hardknott Bar & Cafe is only a short walk nearer to Hardknott Pass.
The Woolpack Inn has an adjoined brewery known as Hardknott Brewery.
There is also a water corn mill dating back to 1547 known as Eskdale Mill.
Since 1970’s this has been open to the public as a visitor attraction and showcases original working milling machinery driven by two overshot waterwheels.
The mill underwent a £1 million refurbishment in 2019

with support from the National Lottery Heritage Fund and Copeland Community Fund. 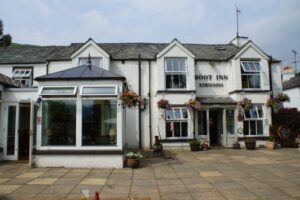